Okay, first of all, if you’ve never heard of Arcade Fire, shame on you. Fronted by the husband and wife duo, Win Bulter and Regine Chassagne, this band is a collaboration of styles and sounds giving a new meaning to word “unique”. Most of that unique quality has to be due to the sheer number of instruments played. I mean, how many bands do you know that tour with french horns and accordians?
In fact, you know that expression, less is more…well not with these guys. More is just more. More instruments. More band members (7 constant members, more when they head out for touring). 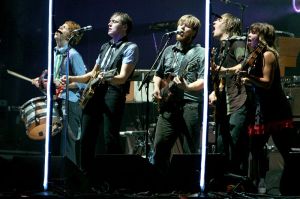 Today Arcade Fire will be live screening the releasing of their new album, “The Suburbs”, with a performance at Madison Square Garden. So now you have no excuse to say, “Arcade Fire who??” again.